Behind the scenes of adidas Formotion 360º series

Matthew Celia, Co-founder at Light Sail VR and Director of adidas FORMOTION 360º series, says that the core idea of the project was to give women the opportunity to see how clothes move and fit across a variety of activities. “This is something that can get lost in the traditional 2D approach, which is often filled with quick cuts and cropping that makes it hard for consumers to decide if the product is right for them. With 360º video, there is no hiding. What you see is authentic.”

VR format in tune with the product concept

Spotlighting different products from the FORMOTION collection, the four 360º videos allowed women to choose which person they wanted to follow and see how the product fits. For Matthew, it was all about giving the audience the freedom to watch who they want, when they want. “It felt very in tune with the whole concept of FORMOTION, which I understood to be a product line designed by women, for women, that moves and shapes no matter what your body type is. I like that sense of empowerment and I feel that as a director, ceding control of the frame is a similar sense of empowerment for my audience. Let them see the product in action, full body, no cuts, and give them the freedom to pick who to follow.” 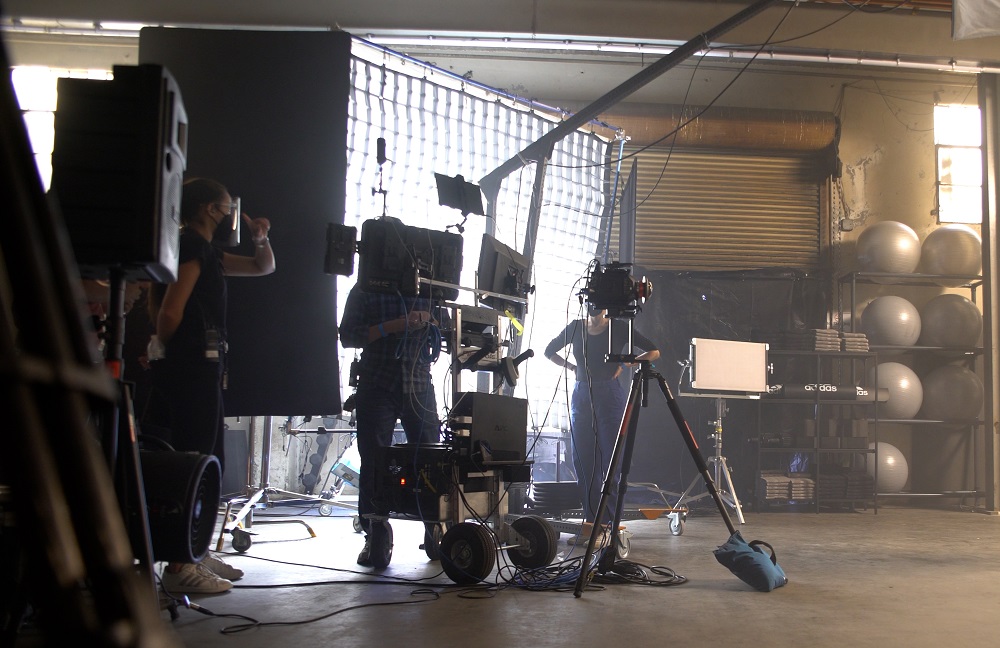 Mistika Boutique Inside and Out

The three key functionalities of Mistika Boutique that were essential for the creatives on this project were VR Stitch, Latlong aware shapes in the color grade and easy XML import from Adobe Premiere Pro. Sometimes it is hard to visualize everything together, so to make better creative decisions, Matthew finds it helpful to be deeply involved in the post production process. “Since it is a 360º video, there isn’t editing persay, but I handled all of the nodal stitching and put all the pieces together from various members of my team (VFX compositing, graphics, sound, and color) to create the final product.”

The team started and ended the post in Mistika Boutique. “We brought in our raw footage, which was shot on the Blackmagic URSA Mini 12K and then transcoded to EXR sequences. The footage was captured using our custom nodal rig and due to the pandemic, we had a lot of individual plate shots. Each talent was actually shot separate from one another.” In addition to the four talent plates, they also needed some clean ones for the ceiling and the rest of the lights that were going to be painted out later. “This meant we needed rock solid stitch. In Mistika, we used the VR Stitch node to generate still frames of each plate and brought them into PTGui to create a stitching template,” adds Matthew.

Once the template was completed and it was verified all of the plates unwrapped into a perfect stitch, they rendered them out individually to send to VFX, where some detailed compositing would be done to merge and blend everything together.

With the final composites, the project was brought back into Mistika Boutique for the color grade. “Mistika’s color tools are seriously impressive for VR work – how quickly and easily the colorist was able to address the feedback and create shapes, isolate colors, pull out detail and create a very high quality look that we were looking for. All in, I found it to be a very impressive workflow and it made the creative process move quickly.”

For Jeff Sousa, Senior Colorist at Dungeon Beach, having (1) a compositing layer stack, (2) an immersive and moveable VR view, and (3) Mistika’s full DI tools, all within the same interface, made this challenging grade achievable. “We have these four women in 360º space and each has a ‘picture-in-picture’ overlay next to them, showcasing product detail but shot on a different camera against a different background. Of course, the color of the clothing needs to be consistent. Here the VR View and Evaltree Tag team nicely. With the agency creatives supervising a live session, I was able to literally look around the 360 space, frame up the talent next to their PIPs, then tweak the clothing in both environments using the fixed vectors. By simply clicking either on the 360º plate or on the PIP clip in the Evaltree, I was able to control the colors separately, all while viewing the seamless final composite until the clothing matched perfectly.”

With a brand like adidas, the team at Light Sail VR and Dungeon Beach knew the look needed to be consistent with the high level of quality in other 2D video assets. “This is a huge challenge for 360º videos, as they are often captured with small sensor cameras at a very high compression ratio and low bit rate. Since we captured this project using our Blackmagic URSA Mini 12K paired with the Entaniya HAL 250 lens, we were lucky to have the color data to really shape the image in the grade and deliver a very high quality final product.”

The main focus when developing the look was always on clothing, making it stand out from the background and ensuring the colors were accurate across the 360º environment and the picture in picture close-ups which were captured on a cyc stage with a different camera. “Once that was dialed in, we added a certain amount of shape to the lighting to help focus attention on our talent. This creates the effect of “framing” the image by utilizing shadows to give us a vignette feel.”

Tight schedule as one of the major challenges

Having only three weeks from wrap on set to the final delivery made time one of the biggest challenges of the project. “That’s an incredibly short time frame to handle post on four 360º videos as well as ten additional 2D cuts for social media. We’re all still working from home, so slinging back and forth large files via the internet can take an overwhelming amount of time. Our workflow needed to be rock solid, and this was on a new camera system and workflow we had not done on a professional production yet,” shared Matthew.

Mistika’s highly-optimized GPU-based performance helped the team to be as efficient as humanly possible. “The stitching was incredibly fast and easy thanks to the ability to quickly create stills and import PTGui project files. Once we got into color with Jeff, our workflow became as simple as sharing Mistika ENV files (which are very small). Jeff could color in Brooklyn, and we handled the rendering here in Los Angeles. That way, as we continued to make small tweaks to the compositing, we didn’t need to resend super large files for him to grade and receive super large files from the Prores 4444 8K renders.”

Light Sail VR is a full-service commercial production company that specializes in immersive media storytelling. We craft 360, 180, traditional 2D, and interactive and game engine VR content for agencies, brands, studios and consumers. Founded by managing partners Matthew Celia and Robert Watts in 2015, Light Sail VR specializes in story-driven content with compelling narratives, dynamic characters and entrancing visuals. How a person ‘feels’ inside the VR world is the key to unlocking the true potential of the medium. The technology and tools are important but at the core, it’s all about taking the audience on a journey. Loving the work and helping our clients explore new possibilities for their audiences is an honor and our mission.

Dungeon Beach is a one-stop-shop audio and video post-production studio in the heart of Brooklyn. It offers audio mixing, sound design, color grading, visual effects, conform & online editing, and DCP services all under one roof. This integrated approach allows for storytelling opportunities long after picture is locked. Its indie film projects have screened at TIFF, Tribeca, and Sundance. Its TV projects have played on HBO and Netflix, and its commercials and branded content have run everywhere from Monday Night Football to Nike’s Instagram feed.